Yesterday’s walk was on the Not really a “hike,” per se. To me, a hike involves hills, gullies, backpacks, and of course, mud galore.

No, yesterday was definitely a gentle, peaceful walk! And it’s someplace I’ve been before — in fact, I blogged about it this past January: Brown’s Creek Bike Path in Chatsworth, California!

It runs (at least, the segment I did) from Devonshire (on Canoga, just across the street from the Ralphs and next door to the nursery) up to almost the 118 Freeway. And that’s the walk I did yesterday!

You can probably go further than this, but I decided to turn around, which made it a nice 2-mile loop. And actually, I  walked on the bridle trail, which is parallel to the bike path and on the other side of the wash. I like it because it’s soft, not paved, and there’s always the possibility of seeing a horsie. Didn’t see any this time, but ya know, as they used to say, “Where there’s Hope, there’s Crosby!”

After the walk, I ambled over to the Ralphs and got some lunch – a couple of pieces of baked chicken and a scoop of mac & cheese from the deli, plus a little container of vanilla yogurt. It was a little sad, though, looking across the parking lot at the Anytime Fitness.

See, I allowed my membership to lapse after my prepaid one year ended. As much as I liked it, I’ve kinda moved on – doing way more outdoor exercise and coming up with all sorts of excuses to avoid the gym. So, fare-thee-well, Anytime Fitness Chatsworth – you were nice while you lasted, but I gotta get outdoors! 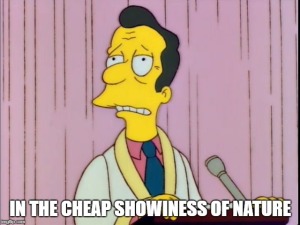 That’s it for today — have a great weekend! I’m heading to Arizona next week…

Arizona: all beach, no ocean

but I’ll still check in Monday for a quickie weigh-in!