That’s it! Time to carpe the diem and make some toast or something! Have a great day and weekend, everyone — see you Monday! 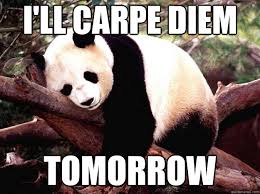