First, and most importantly, my Weekly Weigh-in:

Yippity skippity!! I haven’t been in this decade for … well, for a decade!

When I got married in 2007 (late bloomer, long story), I weighed 220 pounds, which was definitely way too much. 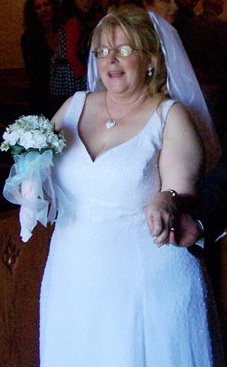 But the thing is – it was still WAY less than what I’ve weighed for the past few years.

So – nice way to start the week, doncha think?

Now, here’s a little Diet Wisdom Tip I came up with this morning, while debating what to have for breakfast.

In the not-so-distant past, I used to go out to breakfast every Monday morning with a gal pal. We’d go to diners, like Denny’s, Bob’s Big Boy, and others.

The one thing they all had in common? BIG BREAKFASTS. 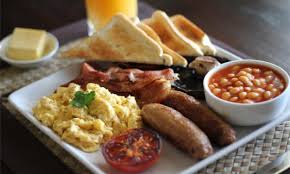 Sigh … yeah, it wasn’t at all uncommon for me scarf down close to 1,000 calories at one sitting. French toast? Bring it on! Bacon? Yeah, baby! Fried eggs, sunny side up? You got it! Not to mention the accoutrements – butter, maple syrup, and of course, lots of strawberry jam for the toast (and more butter, of course!).

But I felt virtuous about it, ’cause I’d always order the WHOLE WHEAT toast. Yeah, that was healthier, right?

So, long story short, last fall, I’m sorry to say, I had falling out with this gal pal, so we stopped going out to breakfast every Monday morning. Which, looking back now, was probably the best possible thing that could have happened, primarily because I was so comfortable with those big giant Monday breakfasts that I had no problem whatsoever with trying to reenact them on my own, other days of the week.

And OK, I know this is getting a little longer than I’d planned, so let me just cut to the chase with my Big Dieter’s Breakfast Breakthrough Idea. Ready? Are you sure? ‘Cause I could build up to it a little more, and —

OK, OK! Anyway, my big breakthrough idea this morning was – if you’ve decided to count calories, but are having trouble reconciling yourself to the idea of not being able to eat all that great stuff you were used to having for breakfast – why not have them all, BUT HAVE EACH ONE ON A SEPARATE DAY?

In other words, a week-long Big Breakfast, divided into five days!

Make a list of all the stuff you enjoy having for breakfast and know you’d really, really miss if you had to give it up completely. For example:

OK – now here’s the great news. YOU CAN STILL HAVE ALL THOSE THINGS! Just not all on the same day!

So let’s say it’s Monday (and what a coincidence – it is!). You’ve made your list of My Top 5 Favorite Breakfast Thingies That I’ve Always Enjoyed In One Big Meal (or MTFFBTTIAEIOBM, for those who like acronyms).

Now, just pick ONE THING from that list – and have it for breakfast, today. Yes, before you dot another “i,” Bob Cratchit!

Tomorrow, pick another thing from your list – then Wednesday, another – and so forth and so on, etcetera etcetera – till you get to the end of the week. At which point, you will have had ALL the breakfast thingies you love so very, very much – and you can REALLY feel good and virtuous, because you haven’t had them all every day!

Look at you, cutting out a whole bunch of calories every day without giving up the foods you love! Aren’t you wonderful? Yes, you are!

I mean, OK, you still need to check the calories on the stuff you’re having, and make sure you don’t feel so virtuous you overstuff yourself at lunchtime to make up for it. But still, if big breakfasts are a big problem for you, why not give it a try?

Who knows — MTFFBTTIAEIOBM may just become the new diet buzzword of the decade!

Either way — hope you have a FANTASTIC Monday!

(Unused pingback of the day: Planet)